A fascinating account of the true story behind the legend, in this unique book.

The book tells the story of Good King Wenceslas as he is known from the popular Christmas carol by John Mason Neal. He is also known as Saint Wenceslaus in North America.

There has been nothing like it published before in the English-speaking world.

This is an interesting and informative book for everybody who has been intrigued by the story of Good King Wenceslas in the famous Christmas carol and wants to find out more about the man himself.

You will learn about the life of Wenceslas, of his death at the hands of his treacherous brother and the lives and legends of his countrymen. Discover how young Wenceslas was born into the ruling dynasty of Bohemian dukes, princes and kings. Good King Wenceslas is also known as Saint Wenceslas (in the UK), Saint Wenceslaus (in the USA) or svaty Vaclav (in the Czech Language).

This book is not just about the life and death of Wenceslas, but also the history of his people and country. 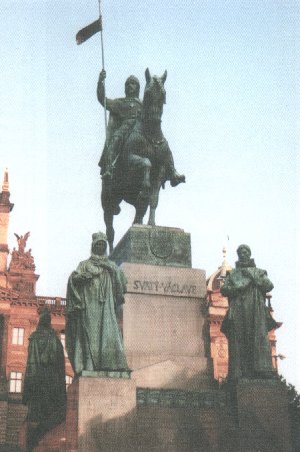 Legends and archaeology tell us about the early days of the Slavic people in Bohemia. One legend about Duchess Libuse describes how she established the Premyslid dynasty of dukes, princes and kings which ruled Bohemia and the Czech Kingdom for almost a thousand years.

Wenceslas was born into this dynasty and is now revered as the first Czech Saint and many churches were built in his name around the world. Statues of him were put up in public places like this one pictured in Wenceslas Square, Prague.

Many heart-warming legends have sprung up about his life, like the one about the thousand-year-old oak tree still standing in the grounds of what was once a border castle, Stochov, where young Wenceslaus was born. Legend has it that his grandmother, Ludmila, planted the oak tree there at the time of Wenceslas's birth. Nannies watered the sapling with the bath water of baby Wenceslas, thus giving the tree its unusual staying powers. 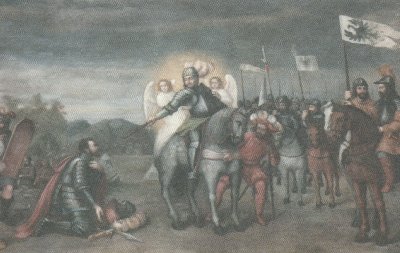 Wenceslas lived and ruled like a true Christian. He was not afraid to stand up to the neighbouring Duke Radslav. To save bloodshed on both sides, Wenceslas challenged Radslav to a duel and won. As depicted in the painting shown on the left, which is now in the basilica of Saint Wenceslas in Stara Boleslav.

There is a lot more to the story of Good King Wenceslas, which is revealed in the book you can now buy online.

One copy of Good King Wenceslas is £9.99 £7.99 UK Sterling - reduced while stocks last, and can be ordered securely via PayPal.

Postage and packaging has been reduced to £1.00 within the United Kingdom via Royal Mail, and £3.50 Internationally via Air Mail.

At the time of Jan’s schooling, the only second language available in schools was Russian. When Jan was in his teens he began private lessons in English and acquired penfriends in the USA and Canada to practice his English. 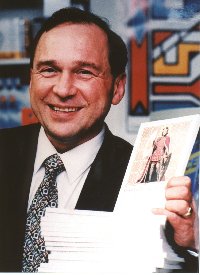 In 1968, during Dubcek's Prague Spring, Jan received an invitation through a family friend to go to Glasgow in Scotland for a summer holiday to learn English. After his parents paid for a train ticket from Prague to London, Jan was allowed to exchange only a small amount of money from the Czechoslovak bank in Prague for his pocket money. He hitchhiked from London to Glasgow. After a week in Scotland Jan returned to London where he helped in the home of George Cansdale, who was once the director of the London Zoo and a prominent member at a Central London Church of England church. He later went to work on a farm in East Anglia when the Warsaw Pact countries invaded Czechoslovakia. At the request of his parents, Jan returned to Czechoslovakia in October 1968. On his return, Jan found that the spirit of the Prague Spring had disappeared beneath the pressure of the Soviet-led occupation. He managed to leave the country permanently for England in June 1969, where he completed his university education.

In England, Jan used to tell his friends that the story of Good King Wenceslas was based on a real historical person and his friends suggested to him that he should write up the story and publish it. In October 1988, after nearly twenty years in Britain, Jan returned to Czechoslovakia for a week's holiday with his young children Adam and Hana (Czech spelling of Hannah) and started to research the history behind the story of Saint Wenceslas, collecting books and visiting important sites. Jan visited Czechoslovakia regularly to continue his research. The book was finally published in 1995.

Jan has written a short introduction in 2020 to the subject of Saint Wenceslaus - Also known as Good King Wenceslas, which is now available on Amazon, on Kindle and in Paperback.